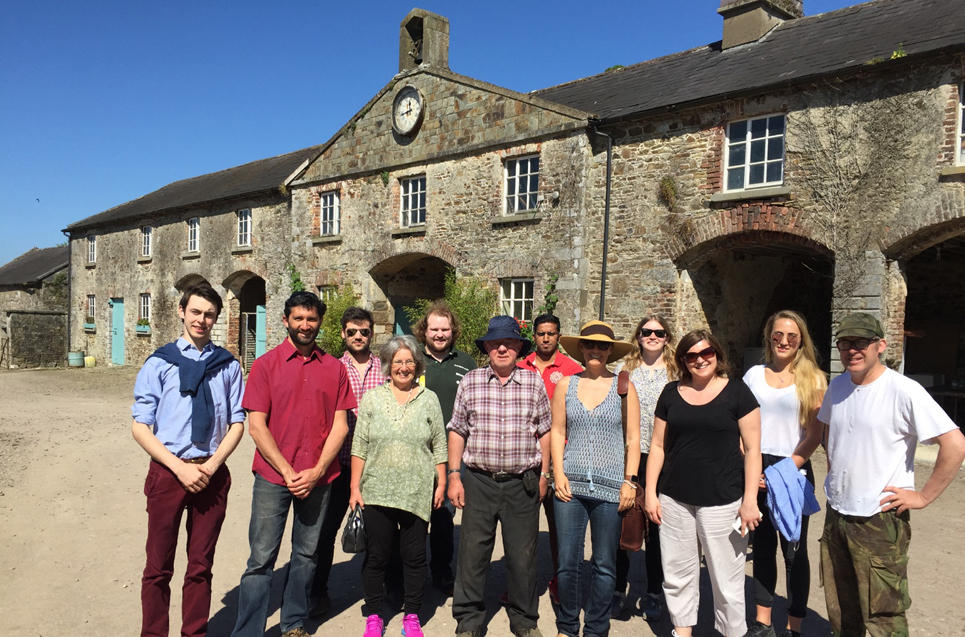 As the sun shines brightly in Ballymaloe House and the long summer evenings are ahead, some of the Ballymaloe team went on a familiarisation tour to local Cork Cidery / Distillery and fellow Ireland’s Blue Book Country House Hotel, Longueville House.  Longueville House is currently owned by the O’Callaghan family and is located just outside Mallow.  Set in a 500 acre wooded estate, Longueville House was originally built in the 1720’s and the Georgian Mansion is situated to enjoy breath-taking views of the surrounding Blackwater Valley.

Overlooking the rear of the House in the courtyard is the garden maze, leading to the walled garden full of fruits and vegetables that are used in the restaurant. The spiralling paths are surrounded by stone farm buildings, traditionally used to make ice cream from the farms herd for the local market, are now used for the estates ever growing cider and apple brandy production.

We meet with Dan Duggan, the master Distiller of Longueville Apple Brandy & Cider who has worked on the estate for over 40 years. He began working on the grounds when the late Michael O’Callaghan first began making wine from the vines on the grounds. Dan leads us to the orchard, where apple trees in summer blossom are planted in rows as far as the eye can see.

The orchard extends over 25 acres, home to two variety of cider apples, Michelin & Dabinett. From late October to mid December the apples are harvested, pressed and fermented on the farm. Similar to wine, each year bears a different yield from the crop and hence each cider follows a specific year vintage

The fermentation lasts for up to 6 months in stainless tanks, from this the Longueville House Cider is bottled and ready to be enjoyed, a medium dry cider with a rich amber colour.

Using the cider, it is then double distilled to produce the Longueville House Brandy. Dan explains the process of double distilling using copper pot stills, first producing feint wines, then distilling again to produce the clear spirit that is Apple Brandy. This is then put to mature in French Oak Casks for 4 years. The final result is a brandy, rich in apple aroma, providing a smooth full bodied drink.

We highly recommend a trip to Longueville House to discover the hidden gem that lies amongst the woodland.

Their products are available in the bar at Ballymaloe and also from Longueville House.