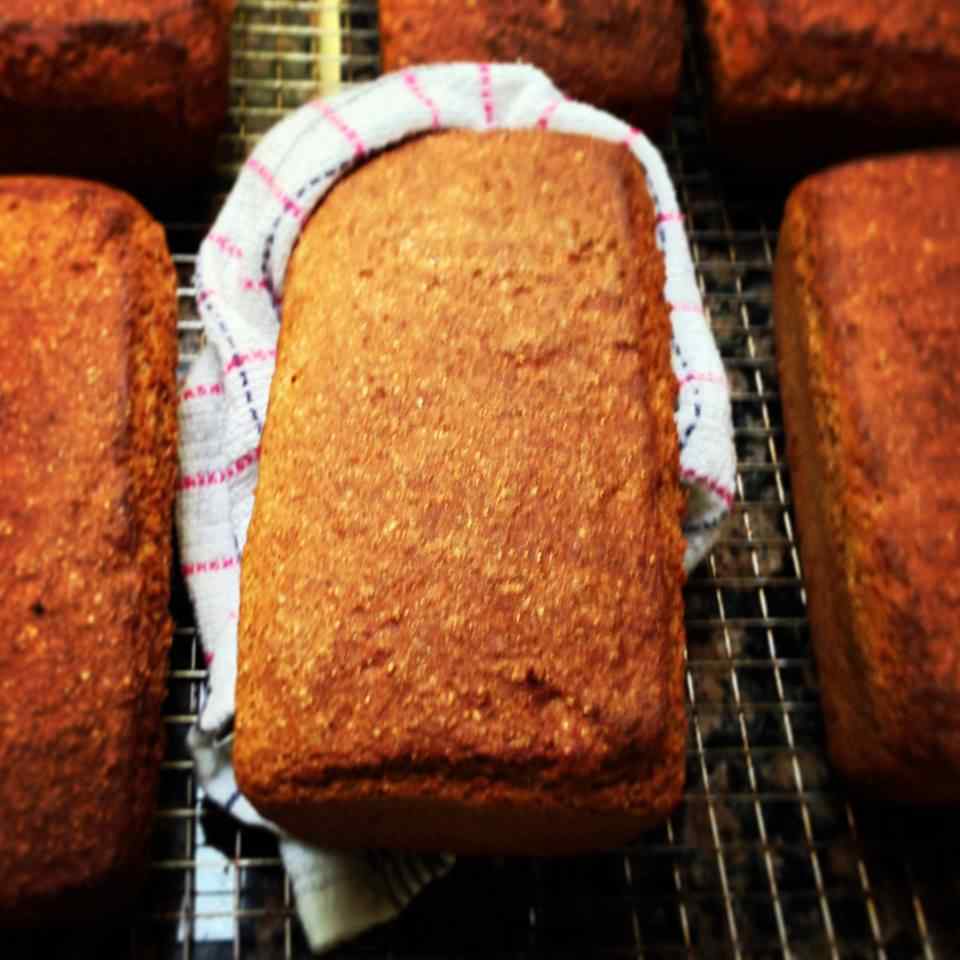 When making Ballymaloe brown yeast bread, remember that yeast is a living organism. In order to grow, it requires warmth, moisture and nourishment. The yeast feeds on the sugar and produces bubbles of carbon dioxide which causes the bread to rise. Heat of over 50˚C will kill yeast. Have the ingredients and equipment at blood heat. White or brown sugar, honey golden syrup, treacle or molasses may be used. Each will give a slightly different flavour to the bread. At Ballymaloe we use treacle. The dough rises more rapidly with 30g (1oz) yeast than with 25g (3/4oz) yeast. We use a stone ground wholemeal.

Different flours produce breads of different textures and flavour. The amount of natural moisture in the flour varies according to atmospheric conditions. The quantity of water should be altered accordingly.

The dough should be just too wet to knead - in fact it does not require kneading. The main ingredients - wholemeal flour, treacle and yeast are highly nutritious. Note: Dried yeast may be used instead of baker's yeast. Follow the same method but use only half the weight given for fresh yeast. Allow longer to rise. Fast acting yeast may also be used, follow the instructions on the packet.

Preheat the oven to 230C/450F/Gas Mark 8. Mix the flour with the salt. The ingredients should all be at room temperature. In a small bowl or Pyrex jug, mix the treacle with some of the water, 150ml (5floz/generous 1/2 cup) for 1 loaf and crumble in the yeast. Sit the bowl for a few minutes in a warm place to allow the yeast to start to work. Meanwhile check to see if the yeast is rising. After about 4 or 5 minutes it will have a creamy and slightly frothy appearance on top. When ready, stir and pour it, with all the remaining water (10fl ozs/275ml), into the flour to make a loose-wet dough.

The mixture should be too wet to knead. Allow to sit in the bowl for 7-10 minutes (time varies depending on room temperature). Meanwhile, brush the base and sides of the bread tins with a good sunflower oil. Scoop the mixture into the greased tin. Sprinkle the top of the loaves with sesame seeds if you like.

Put the tin in a warm place somewhere close to the cooker or near a radiator perhaps. Cover the tin with a tea towel to prevent a skin from forming. Just as the bread comes to the top of the tin, remove the tea towel and pop the loaves in the oven 230C/450F/Gas Mark 8 for 20 minutes, then turn the oven down to 200ºC/400ºF/Gas Mark 6 for another 40-50 minutes or until it looks nicely browned and sound hollow when tapped. The bread will rise a little further in the oven. This is called “oven spring”. If however the bread rises to the top of the tin before it goes into the oven it will continue to rise and flow over the edges.

We usually remove the loaf from the tin about 10 minutes before the end of cooking and put them back into the oven to crisp all round, but if you like a softer crust there's no need to do this. Copyright Ballymaloe Cookery School