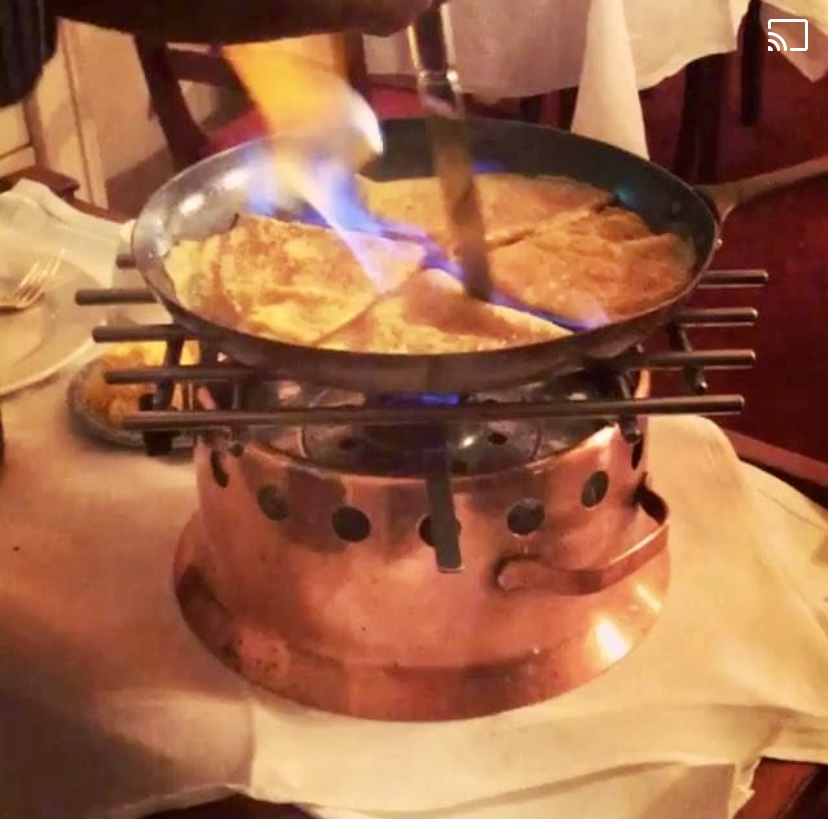 Tuesday 16th February is coming up fast and pancake recipes are beginning to flood the internet.  This one is for the gown-ups and Myrtle's introduction, taken from the 3rd edition of her original Ballymaloe Cookbook, comes with a safety warning.  The pancake recipe below, minus the alcohol and theatre, is delicious simply with lemon and sugar for the kids too.

"Crêpe Suzette, the queen of the pancake family, is a party piece. It cannot be served to too many people at once, so it goes onto our menu around Shrove Tuesday time, when oranges are at their best and restaurant numbers are down. I usually have to dress up and cook the crêpes myself for the customers at table.

One evening I spruced myself up, put on a suitable little black dress, washed and set my hair so that it was all soft and fluffy and arrived in the dining room ready for the performance. I proceeded to a table of about six people, all wanting crêpes. I followed the usual procedure of heating the pancakes on both sides in hot orange butter, folding them into fan shapes and arranging them around the edge of the pan, finally pouring in orange curaçao and brandy to flame them. Well, six people take quite a lot of pancakes, so I put in a good dash of the two liquors. They ignited with quite a bang – gave me a little shock, in fact, but naturally I proceeded with the cooking operation. After a minute, a waitress near me started to scream and a look of unusual consternation came over my customers. Then suddenly, a man jumped up from the table and enveloped my head in his serviette.

I didn’t know that I was calmly cooking with a halo of flames engulfing my lovely fluffy hair.

To make the pancakes, put the flour in a bowl and make a well in the centre. Into this pour the egg, egg yolk, oil and curaçao. Stir, gradually drawing in the flour from the sides as for ordinary pancakes. Add the milk slowly until it is the consistency of thin cream. Leave aside for 30 minutes. To cook the crêpes, put a small ladleful of batter into a hot non-stick frying pan. Flip once bubbles appear on the surface and cook on the other side. Keep the crêpes until ready to serve.

To make the sauce, grate the rind of the oranges very carefully so as not to penetrate the white. Add to the butter and sugar and cream vigorously until smooth.

To finish, assemble the following:

Put the pan on a flame. Melt about 15g (1/2oz, 1 tablespoon) of the orange butter in it. When bubbling, put the pancake in and heat through on both sides, turning. Fold it into a fan shape. Rest it against the side of the pan. Continue with the remaining pancakes. Sprinkle them with caster sugar. Pour over brandy and curaçao. Set alight, keeping your face away from the flames. Tilt the pan and spoon the juices over the pancakes until the flame subsides. Serve immediately on hot plates.