For the honey mousse:

For the Lavender Jelly: 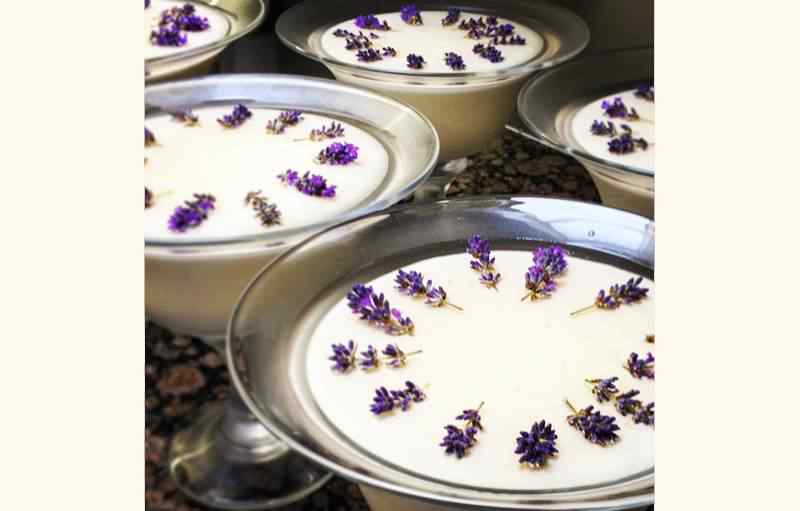 We recommend that you make this dessert in June with garden lavender just before the flowers open. Using only the best quality honey will make this feather-light mousse truly unforgettable. We use honey from our Ballymaloe House hives.

Whip the cream to soft peaks and keep in the fridge. Sprinkle the gelatine over the cold water in a small bowl and allow to “sponge”. Once fully rehydrated, melt the gelatine by placing the bowl over hot but not boiling water. Add the honey and Grand Marnier to the melted gelatine and stir until the mixture is an even consistency and allow to return to room temperature. Whisk the egg to a pale mousse, I do this using an electric mixer, then gently fold the mousse into the whipped cream. Now fold the cream mixture into the honey and gelatine in three stages. Pour the mousse into its serving dish and chill until set. Now prepare the lavender jelly.

Put the sugar and 8 floz water in a heavy-bottomed saucepan and bring slowly to the boil. Once the syrup has boiled remove the saucepan from the heat and drop in the lavender heads. Enjoy the wonderful lavender perfume as the syrup cools to room temperature. Meanwhile, sprinkle the gelatine over the 2 ½ tablespoons cold water in a small bowl and allow to “sponge”. Once fully rehydrated, melt the gelatine by placing the bowl over hot but not boiling water. Strain the cooled syrup through a sieve, add to the melted gelatine and mix well. Arrange 6 lavender heads on top of the set mousse and carefully spoon over enough liquid jelly to cover the lavender and chill until the jelly is set.