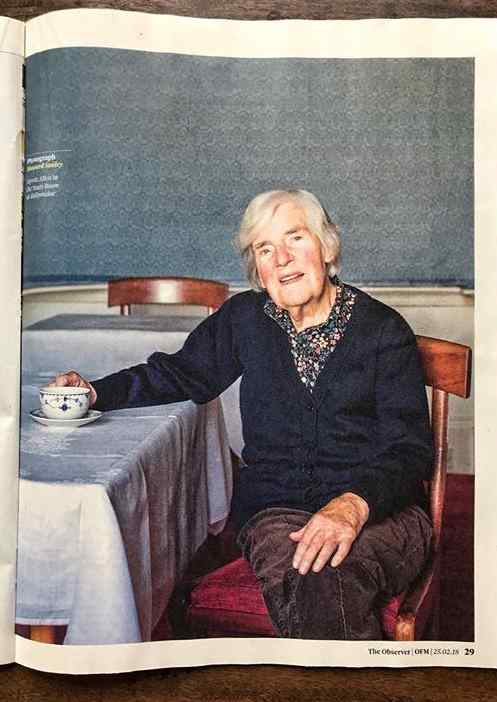 The OFM 50: Everything we love in the world of Food Right Now

She is the holy-grail, the mothership. She’s where modern Irish food began. Back in the myths of time, Myrtle Allen was the modest farmer’s wife who opened a country house restaurant in East Cork in the 60s and gained a Michelin star. She even opened a place in Paris and is still revered by posh French chefs. She created the global brand of Ballymaloe, became matriarch of a food clan who, like the Kennedys, prefer to cluster together on campus. Myrtle is the original Allen, a mother of six, mother-in-law to Darina Allen who founded the famous cookery school and whose son married Rachel Allen, passing down the dynastic name by female lineage. In short, Mrs Allen (even Darina and her brother and fellow Irish TV star Rory O’Connell still call her that) created the idea of modern Irish cooking. It is impossible to think of a UK equivalent. Only Alice Waters in California comes close.

It was never very likely. Married aged 19 to forward-thinking farmer Ivan Allen – they had met at a dinner at Ballymaloe – Myrtle couldn’t scramble an egg on her first night back from honeymoon. But she built a library of recipe books and studied under Simone Beck. She even sorted herself a cookery column or two – the Irish Farmers Journal paid her a princely five shillings a fortnight.

Her Ballymaloe Cookbook has an introduction by OFM’s own Len Deighton and has been in print for 40 years. Among sublime recipes and stories, there is one about a “field that has always made good butter. That is long ago and the fragrance is almost forgotten”. On top of everything else Mrs Allen could write.

I had heard she has developed dementia so thought to make a late pilgrimage to see her. She is now 93. I stayed in her daughter Tash’s old room and ate oysters on toast. I talked about their mother with Tash and her sisters. I visited the Ballymaloe school and farm, walked the cliffs of Ballycotton and feasted on Frank Hederman’s wild salmon. I took tea with Mrs Allen in the Yeats Room she opened more than half a century ago. She was fun and alert, only occasionally confused. As she and the light faded, I thanked her for her company. She smiled and in turn thanked me “for taking time to visit an old Irish country woman”. Did I mention Myrtle Allen’s a national treasure?